Leon E. Titus, Sr was one of Henry Ford's first dealers in the US. His history with Ford began in the 1920's with dealerships in Olympia, Shelton, Hoquiam and Tenino Washington. He also had the Fordson tractor dealership in Olympia at the time. These companies were later sold.

In 1938, Leon was awarded the franchise for Ford in Tacoma, WA and opened Titus Ford in a beautiful 2-story brick Elizabethan building at 616 Broadway in downtown Tacoma.

Following World War 2, James W. Will joined Leon as his partner and the name of the company was changed to Titus-Will Ford.

In 1966, Titus and Will made the decision to relocate the dealership next to a new regional shopping mall located on the interstate freeway running through Tacoma. This was a controversial move as it was customary for local dealers to cluster together in an "auto row", but Jim and Leon had a vision for the future.

Following Leon's passing, Jim Will opened the doors on the new dealership in 1968. It was a large, state-of-the-art facility designed by renowned local architect, Alan Liddle and built by Macdonald Building Company. With thousands of vehicles passing by every day and easy freeway access, the dealership was an instant success.

In 1970, Leon's son, Paul H. Titus, became general manager of the company and later succeeded Jim Will as president.

In 1981, Paul and Jim acquired the Toyota franchise from Temple Motors and moved it from its former location in downtown Tacoma to property next to the Ford store on Interstate 5.

In 1994, Paul Titus was succeeded by his son-in-law, Graham Tash, Jr. as president and CEO.

In 2010, a new 50,000 square foot state-of-the-art facility was constructed for the Toyota franchise on property just north of the old location.

In 2015, after a year and a half of construction, a completely remodeled and expanded Ford facility was rededicated at its current location.

Today, the Titus-Will Automotive Group consists of 2 Ford, 3 Chevrolet, 1 Toyota, 1 GMC/Buick/Cadillac and 1 Hyundai Dealerships with over 500 employees located up and down the I-5 corridor in Western Washington.

Nearly 80 years after its founding, Titus-Will proudly continues its tradition as a family-owned and operated group of companies with third and fourth generation family members from both families participating in day-to-day operations. 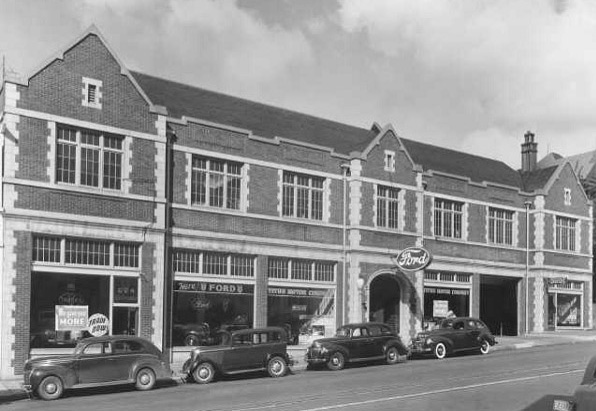 This elegant, Elizabethan style building at 618-24 Broadway was built in 1919 for the Pacific Car Company from a design by Roland Borhek, who also drew the plans for the Rialto Theater. The Titus Motor Company, dealers for Ford vehicles, took over the building in December of 1938. As Titus Motor Company, and later as Titus - Will Ford, they occupied this building until the mid-1960s when they moved from downtown Tacoma to 3606 South Sprague.

Titus-Will continues to serve its customers and community in the Puget Sound area, with many years to come.